So, I’ve left Chennai behind. While I don’t think I understand that much about how the place works, one thing seems fairly apparent: There’s never been much in the way of conscious planning. The city just grows, and gets more congested, with no accommodation for getting people from place to place (they’re working on a Metro system that might work eventually, but for now has just turned the core into a construction zone).

Quite the opposite is true of Pondicherry, the much smaller seaside city I visited over the weekend. As the base of the French colonial government, it was very carefully planned, with an orderly grid surrounded by an oval. The Europeans even separated themselves from the rest of the oval into the section closest to the water, known as the French quarter. Different rules apply there. The streets are quieter, dominated by quant guest houses and swank restaurants. White people proliferate (although of course, everyone uses it now; the beachfront promenade is closed to vehicles at night and packed with families taking the evening air).

The other side of the canal is much more interesting. It’s an Indian city, with all the crowded retail and chaotic traffic that entails, but regularized in a pattern with parking strips and sidewalks. To this westerner, it feels eminently more navigable than the tangle of Chennai, and yet also more exciting than the hushed, very consciously European quarter (complete with dancing crowds of boys, top video). A salutary blend!

Here’s the weird aspect. The dominant cultural force in Pondicherry is now not so much the French, but rather Sri Aurobindo Ashram, a 84-year-old institution that now operates a spiritual center, a restaurant, several retail outlets, a hotel, and dozens of other facilities throughout the town that support the ashram. Aurobindo’s radial symbol is all over, and pictures of The Mother hang in places that aren’t even officially affiliated. Pasty women in white tunics wander about, looking quite detached. I find myself looking around with alarm, wondering who’s been inducted and might be eyeing their next recruit.

That’s not even the epicenter of Auro-ism. The real deal is a few minutes bike ride outside the city, in a massive utopian settlement called Auroville, which is supposed to be entirely non-commercial in nature. It was closed on the Sunday afternoon when I finally made it out there, but there’s plenty of stuff around it that’s quite market-oriented: Shops and restaurants that cater to the new-agey visitors, as well as plots of land for sale advertising their proximity to the center of so much peace and purity.

Hey, it’s as good an economic base as any. 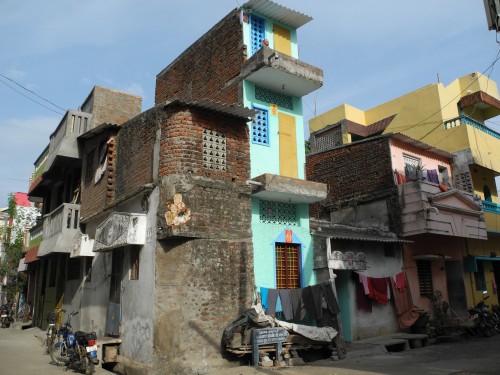 View from inside a covered bazaar.