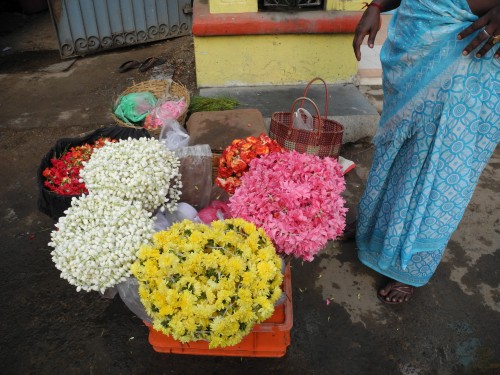 India places great store by its small merchants—the tiny shops that line every commercial street, hawking cell phones, saris, snacks, and other items one might need during the day. So much so, in fact, that populist politicians have largely prevented Walmart from moving in, Mexico-style, citing the preservation of micro-retail. Their reticence makes some sense. Goods may be marked up by small vendors, but at least streets are active—to a degree that town planners in the U.S. can only dream of—and millions of people own their own businesses.

The smallest enterprises are the ones that don’t even have a storefront, operating instead out of carts or simply on mats on the ground. For agricultural goods, the distribution network that sets them up is fairly transparent: In Chennai, farmers come to a neighborhood called Georgetown (perhaps my favorite out of all the Georgetowns!) and drop off truckbeds full of limes, carrots, bananas, coconuts, mangoes, etc. Smaller loads are parceled out from there, I presume to roadside retailers throughout the city.

Both men and women sell produce. Flowers, however, are exclusively the province of women. Everywhere I’ve been thus far, ladies sit on the ground selling piles of flowers, which are used in religious ceremonies and just general decoration. A string of jasmine buds helps mask the stinking air, and I’ve had ladies tell me to turn around so they can pin one even in my little ponytail, a poor substitute for the long black braids they’re used to.

Flowers have their own warehouse, on the outskirts of the city in Koyambedu: A medieval-looking fortress with external stalls heaped full of yellow marigolds. Inside, merchants process the plants and sell them in big plastic bags to women, who’ll spend all day threading them into long chains. It seems like an odd product for the facility, which appears more suited to handling livestock than piles of petals.

Of course, the real money isn’t in the sale of flowers on the street at all. I’m fairly sure that the merchants processing jasmine into oils and then selling them abroad for fancy soaps and shampoos are the ones doing well for themselves. That, however, requires a level of political access and business education that your average stall-keeper just doesn’t have.

A common sight: Flowers in the road.

The fortress of flowers. 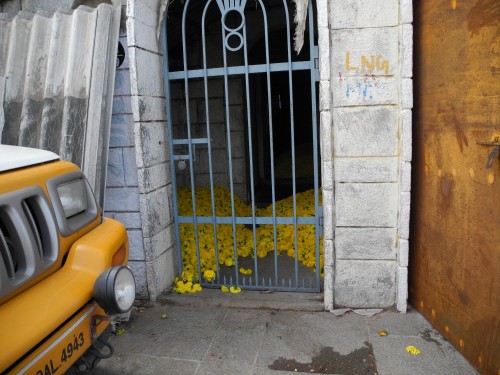